On these retreats, you won’t be going for the famous lobsters. Although, if you extend your stay, maybe you’ll be able to pick one up somewhere.

Just make sure that you are a bit Ahimasa about him and that you put him back in the ocean. Well, it’s up to you of course. Do whatever feels good to you, isn’t that also a bit of a yogic philosophy?

Well, maybe I’ll talk about that in a future article.

Now we’re going to have a look at some great yoga retreats that will take place in Maine.

If you really love to be outdoors and you don’t mind being in the middle of nature, this is really thé retreat for you!

During 8 days and 7 nights, you’ll be enjoying all the perks that this retreat has to offer.

The main emphasis will be on yoga and meditation of course, but they’re also mixing it up with other activities. They are optional, so you can also decide to skip these and do your own thing in those timeslots.

Among these other activities are kayaking, or SUPing, or just going on a nice hike.

And for those who’d like to have a more relaxing day, you can also decide to stay indoors and enjoy the sauna or the jacuzzi.

All of these activities above are included within the package. The only thing which isn’t included in this price, are extra massages you book during your stay.

The retreat center itself has opened in 1997, and the owners have been teaching ever since. Well, they’ve started their practice way earlier, but Sewall House has been running since that year.

The reviews of this place are extraordinary. They’ve got both on BookRetreats.com and on Tripadvisor a 5-star rating!

They’ve even been featured in magazines and chosen by Gayot to be in the top 10 of retreats around the world.

Which is just another reason to join this retreat. Because above all of that, they have kept the price still reasonable for the fame they’ve received.

There will be a maximum of 8 participants at the time, so there will also be plenty of time for you to get the attention you need. 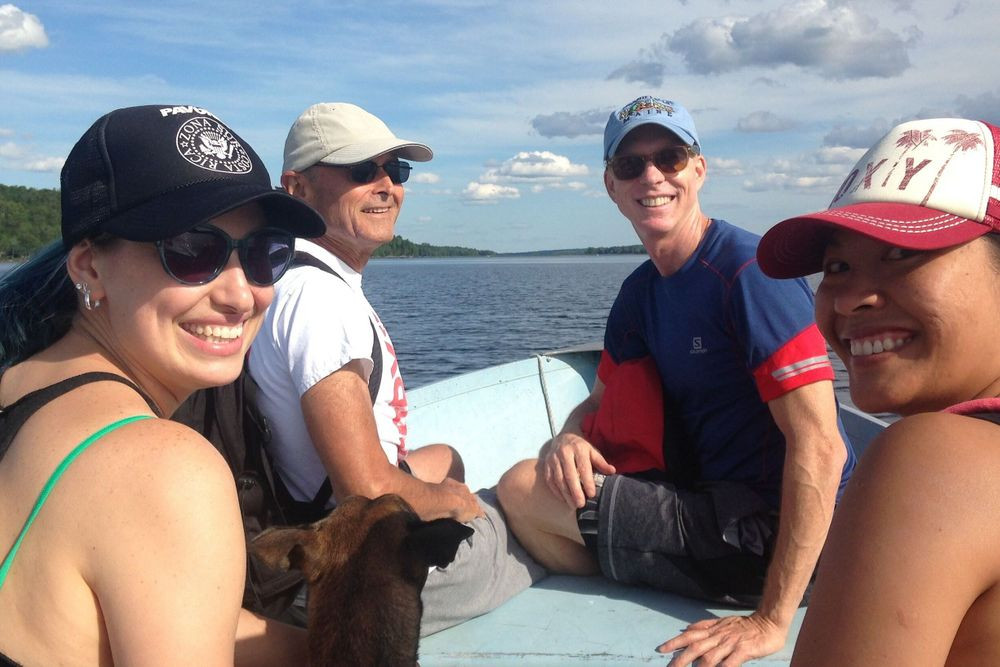 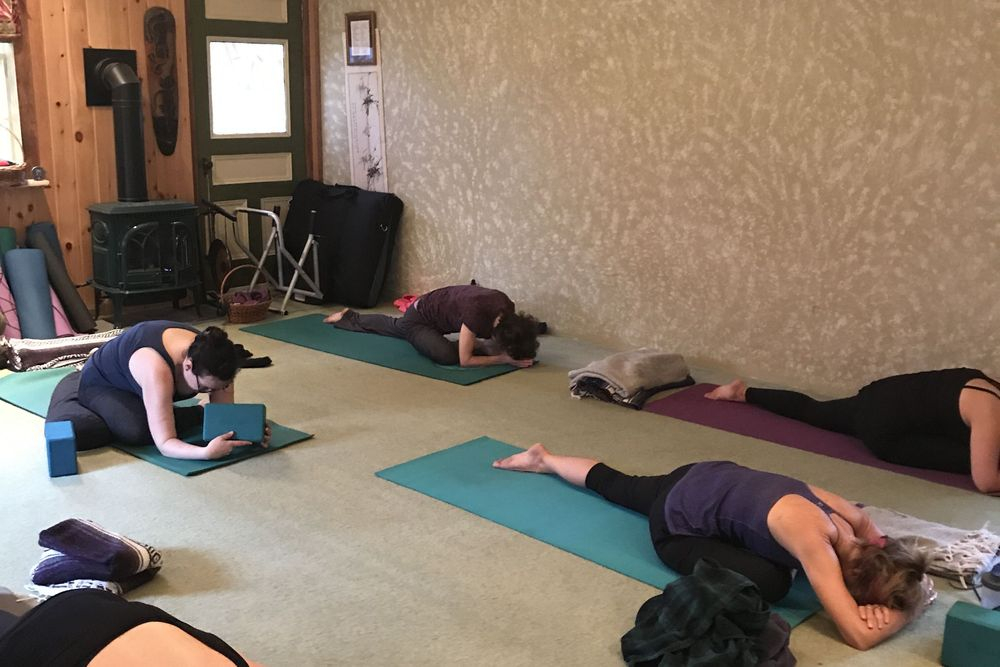 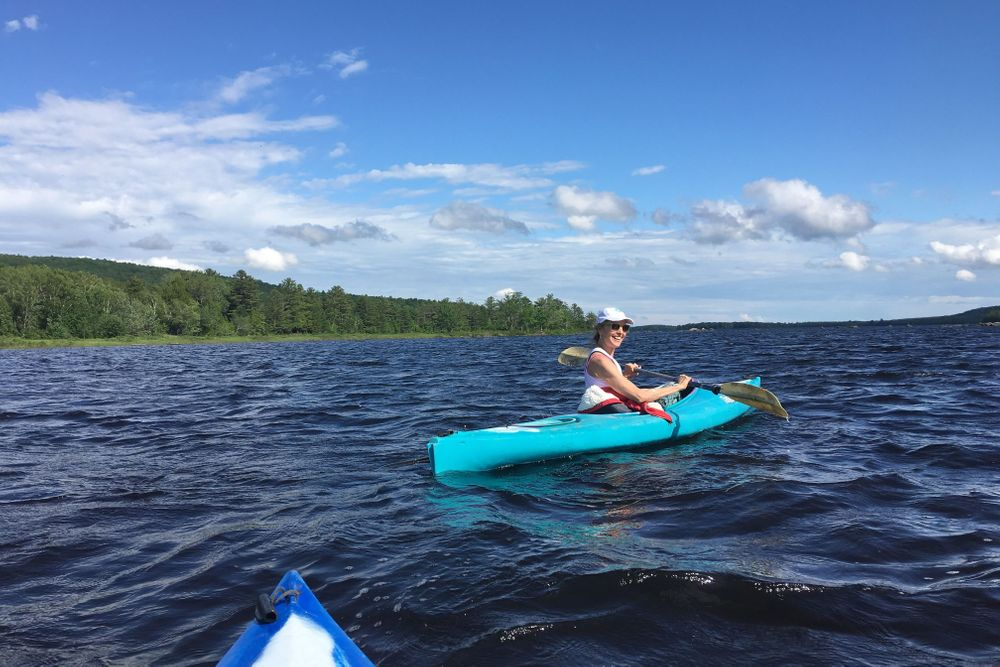 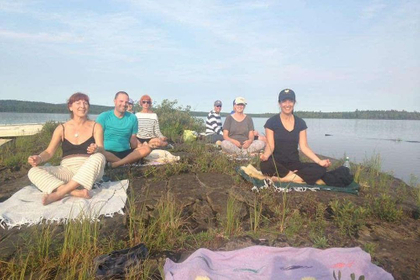 Cooking and Yoga Holiday in Phippsburg

Santosha on the Kennebec
Prices start from US$ 2.000
Available all-year-round

Cooking and yoga are such a great combo. Not because you have to eat while you are doing a class (please, please don’t eat while doing yoga).

The nice thing about food and yoga is that it’s actually intertwined with each other.

How? You say. Well, yoga is not just about the asanas itself, but there’s a whole system within yoga as well. I’m not going to talk about it too much, but you can check my articles about philosophy for more information.

One thing that I’d like to mention though is the fact that the foods you eat can make your yoga practice easier or harder. And that’s also a reflection on life.

Have you ever felt quite bloated after going to McDonald’s and not really satisfied? Well, the foods you are eating will also mirror how you live in this world.

Luckily, at this retreat, you’ll be hearing a lot more about it. And one of the organizers is actually quite passionate about food as well. She believes that we’ve lost our touch with nature and that this is the cause of many problems we might experience.

At this retreat you won’t only get some cooking classes, you’ll also be learning about foraging in the woods.

And if that’s not enough, you’ll be near the coast and beautiful beaches that Maine has to offer. So don’t forget about your hiking boots and maybe even your swimming gear.

Regarding the yoga classes, you can expect a full package of everything that yoga has to offer. They aren’t merely yoga classes, but you’ll also be getting pranayama and a lot of other things as well.

This retreat is really a treat for those who’d like to relax and learn a bit at the same time! 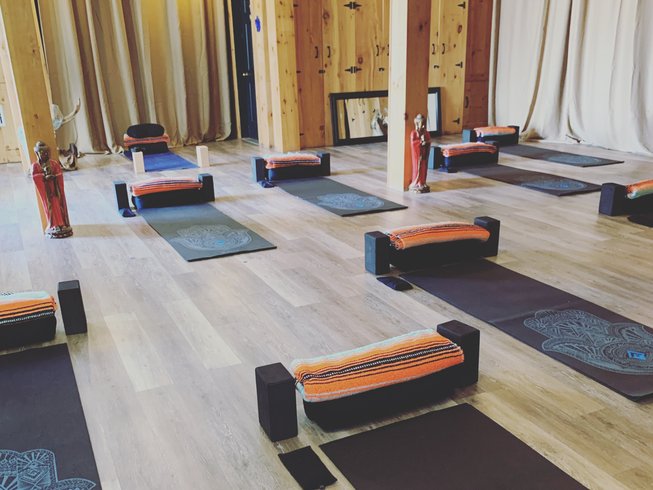 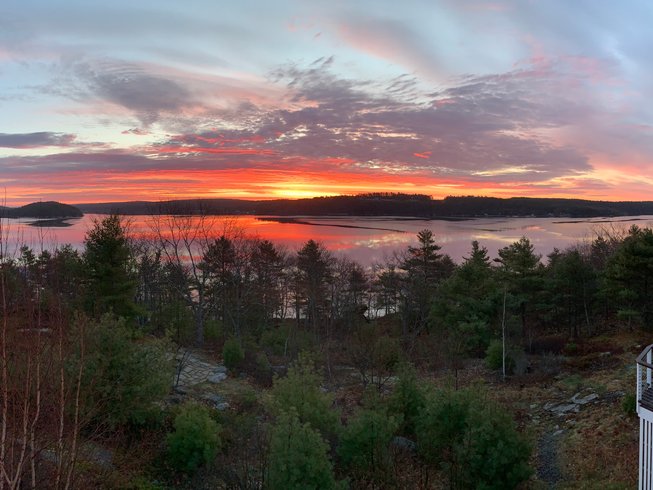 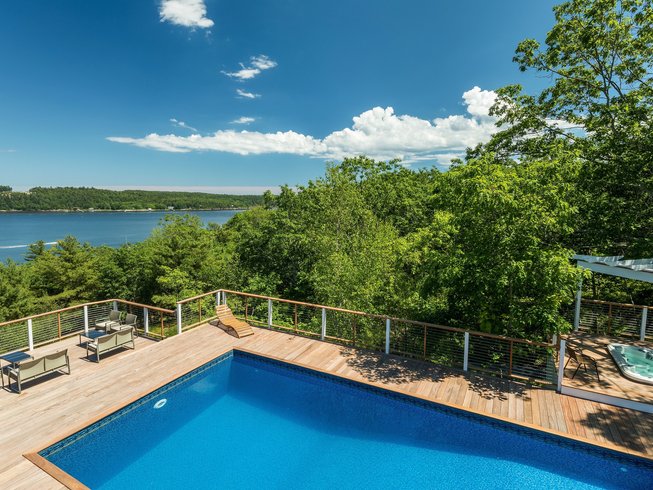 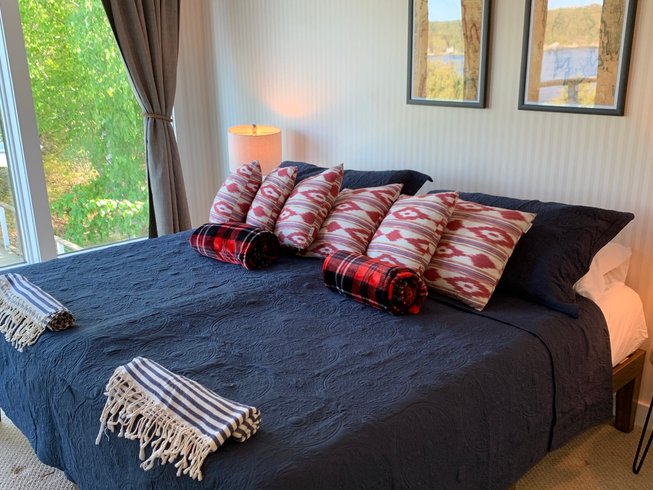 Picture by Santosha on the Kennebec on BookYogaRetreats.com

YOGA RETREAT IN AN ASHRAM IN INDUSTRY

First of all, let’s talk about the elephant in the room, yes there is a town in Maine called Industry.

It’s called this way because the people who founded it were very industrious. And yes, that is a word, I found it on Google and Google is always right.

Anyway, we are not here to talk about the history of the US of A. You are here because you’d like to know more about a yoga retreat in an ashram!

Well, it’s your lucky day. In Maine, there is a town called Industry where you’ll find the Sat Manav Yoga Ashram.

The leader of this ashram is Bhagavan Das Shyam Lescault and he started his yogi life in his teenage years. He devoted his life to discovering the deeper meaning of our existence. And so, since 1997 he’s been a full-on practitioner.

Now he runs an ashram in the woods in the center of Maine.

The retreat he has to offer will last three days and two nights. And it’s full-board. You’ll be getting all your meals during this retreat.

And I do have to mention that it’s quite a luxurious ashram as well.

Normally when I hear the word ashram I think about dorms where you’ll be sharing your room, soberness, and a lot of silence.

The retreat will be a little bit different than those above here though.

As it is an ashram, the practice will be solely focused on contemplating and reflecting.

Therefore, this retreat is an amazing treat for someone that really loves to go into the depths of the mind and unravel everything that is going on in there.

During these three days you’ll be getting a daily 2-hour long yoga session and other group sessions on the side as well.

The food that will be served is completely according to the yogic diet and therefore vegan.

When you are there, you may venture over the entire land and do as you please. This is within the code of being a human being of course. You didn’t go all the way there just to throw away your trash in the woods.

There is also a sauna available, so if you’d like to have a little detox during those two days, go ahead! 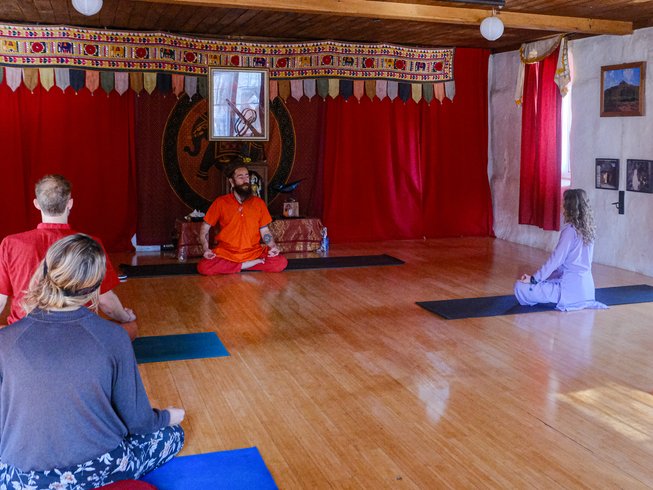 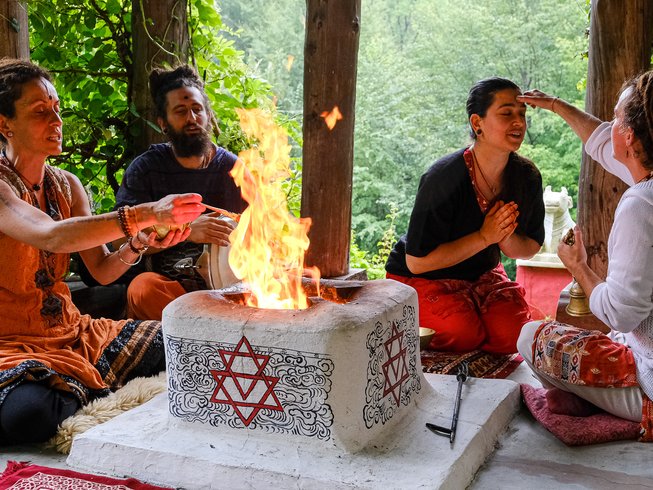 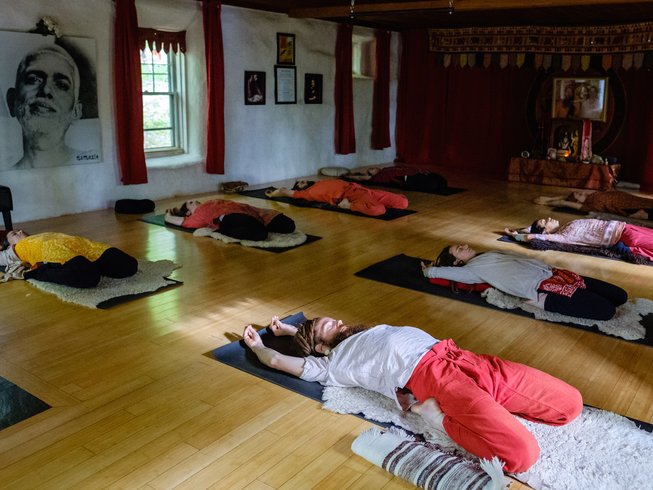 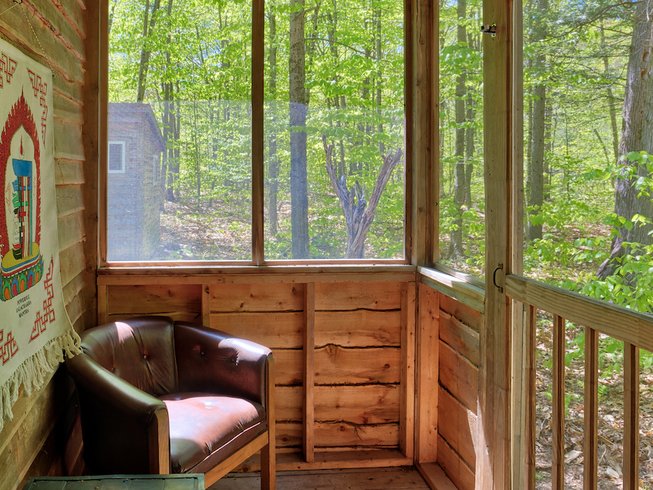 Curious about your carbon footprint? With this free tool down here, you can calculate how big your footprint is.

If you’d like to compensate this and give back to nature, read this article here on how.