This morning I suddenly woke up with the realization that I’ve started creating a lot of blog posts already and that I kind of forgot to explain what the yogi life actually is! Which is quite weird as the blog is called: The Yogi Life For Me. I should’ve probably started out with it, but its never to late, I guess ;)? 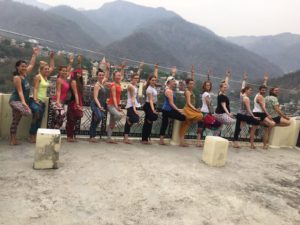 Yoga has been gaining in popularity and you can almost find a yoga studio on every corner of the street and there are a lot of retreats going on all over the world. From my opinion I can see why of course, I’m a yoga teacher myself and I know from my experience what yoga does to you. I’ve never been into following any hype and jumping onto something just because its trending. I’ve started doing yoga before it got popular and I have to say that the demographic has changed a bit. I remember I started doing yoga with only women above 45. Which was alright by me, they were looking for serenity, and that was also what I was looking for. Then I saw yoga getting popular and reaching more people, suddenly there were men, and suddenly there were people in their twenties. And sometimes I could see that people just thought: “I’m just here to check out why its getting so popular.” And very often I found that they were coming back to the classes as well.

But why? Well, I think I’ve mentioned it in one of my articles before, its a holistic discipline. There’s something for everyone! You can look at yoga in just a physical way, you have some issues with your back, knees, neck, … and there are some positions to train your muscles and to get some movement back into your body. You can also look at it in a mental way, if your head is full or you just broke up with someone, there is the relaxation part. And for those who are looking for more of a spiritual connection, there’s that part too, there are a lot of books written about the philosophy behind yoga. In the end of the article I’ll show you the ones I just love if you’d be interested. 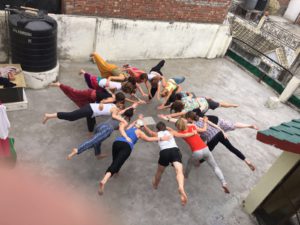 And I found that even if you are just coming for one of the components, somehow they are woven into each other anyway. So even if you say: I’d just like to get more flexible. You’ll start to see at some point that your mind is also gonna get a bit more flexible ;). For that I’d have to go deeper into the philosophy behind yoga, which is not really my intention in my article. I’d like to get you started with experiencing it for yourself and seeing where yoga is taking you on your path. So that brings me to the next point, what is the yogi life? 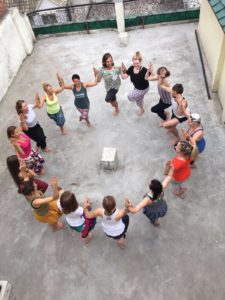 The yogi life is a journey, and for everyone its gonna be different and challenging. Yes, I’m saying challenging, and I’m not just talking about getting into some weird positions where it looks like you’ll be needing some snake-ish qualities to get into them. I’m talking about life changing challenges. I don’t wanna come over as a marketer for yoga, but hey, I’m a yoga teacher ;). I’ve seen people go through so many things in their life. From being stuck at their job, thinking that they actually liked their job, but in reality they hated it. And yoga helped them to see what changes they needed to make to become happy and energetic again. This is a very strong example, but its just to make clear that this is what yoga can do to you. This just used to be one of my students who had a burn-out and decided to quit and start something else all over again! What a guts she had. Another example is one of my own. I always used to have knee pains when I would walk a lot, because I’m hyper flexible I wasn’t walking in a good way, my knee was always over-bending when I was talking a step. Which then again resulted in inflamed ligaments. After a few years of doing yoga I went to my teacher and told him that. He gave me some exercises to do, and since then I never had any issue anymore with my knees. Now I walk in the hills of Portugal for hours without having any knee-problems. 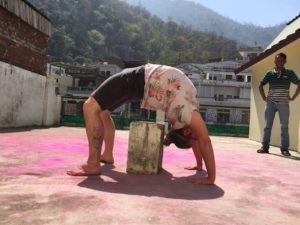 So as you can see, and you’ve probably read even more stories on the internet of how yoga has changed people, the yogi life isn’t just one path. Everyone has its own story and everyone has his own path to walk one. Therefore its also not really possible to really put a stamp on the yogi life. Thank god for that! The only thing I can say that everyone has in common is that it all ends into the same goal, a more peaceful, relaxed and serene life. Because of this you are tuning in with yourself more and more, and you start feeling what decisions are good for you and those who are not. And that goes from eating a particular kind of food, to life changing choices you are preparing to take.

I’m already starting off with some very deep-going literature, but this book is just my all-time favorite! I love the yoga sutras and it has basically been my bible in the time that I was looking for a deeper meaning of what yoga actually is. In this book every sutra gets an explanation of what the words actually mean. It’s explaining what yoga is for and there are given even some good and funny examples to illustrate what they’re talking about. I wouldn’t recommend it to the beginning yogi, but if you are advanced and like to do some digger deeping, this might be something for you.

The Buddha walks into a bar – Lodro Rinzler

This was an amazing book to read if you are quite worried about all the restriction that you’re going to read. As in a lot of books you’ll find that you’ll have to be pure and sustain yourself from alcohol, meat, sex, … This book wipes out all of those restrictions. Well, it gives a deeper explanation about why you shouldn’t drink, but it doesn’t say that you couldn’t. I laughed so hard just reading the first page. It’s a nice book if you’re starting with yoga, it doesn’t say anything about yoga, but it gives a good view on meditation and basically that’s also a part of yoga.

This book I liked very much as well. It expands about the 8-folded path of yoga. No worries if you don’t know what it is yet, you’ll find out about it in your classes ;). It gives a deeper explanation about the goal of yoga and how to reach it. It can be a bit hard to read sometimes, but they’ve given some nice explanations to illustrate the whole story a bit better.

So that was it for now again. The pictures I’ve added are some picture of the teacher training I attended in India, hoping it will get you inspired ;). If you have any questions or if you’d like to share your own story, feel free to leave a message down below in the comment section!

How To: Yogic Breathing Technique