Congee, often also called Jook, considering which Asian country it’s been made in. Here in the West, we also know it as rice porridge.

Although, in Western countries they often eat it as a sweet and it has been handled differently than Congee or Jook.

I’ve been looking at recipes and been testing it for you guys. So let’s have a look what it is, what it’s good for and if it could be incorporated into the yogic diet!

What Is Congee or Jook?

Congee is more referred to as being Chinese. However, it’s eaten in a whole lot of Asian countries. They do name it differently, which may be why you find congee to be Chinese and Jook to be Korean for example.

This dish is typically eaten for breakfast, although it’s often used as a comfort food when you are sick.

You know, like when you make a tea with honey when you are hanging on the couch with a cold.

Originally it’s made with bone broth, but you can transform it into whatever you want.

In Chinese tradition, it’s often eaten as a savory dish rather than a sweet dish. But if you are more of a sweet tooth, go and use some sweet flavors! It’s equally as good. Just a bit different.

But yeah, what is it now? Well, it’s just a porridge made by putting rice and a lot of water together.

When the water boils you leave the rice in for a very long time. This breaks the grain down until it forms a porridge consistency.

I know that in the west it might be a bit weird to eat a warm savory dish in the morning, but I’ve been doing it for a couple of weeks now and it’s really great. Especially now during the cold winter days.

And it has a lot of benefits as well!

As I mentioned at the beginning of the article, very often congee has been used as a comfort/sick food. This is because of the healing properties that it has.

Well, not just that, but rice and stock, in general, are really easily digestible, making it an amazing food when you can’t keep anything in your stomach.

The warmth itself also is very suiting, which can help with a smooth recovery. And even though it might not be full of vitamins, at least you’re getting something nutritious into your body.

In Traditional Chinese Medicine it’s even seen as a tonic to replenish your chi/energy.

They don’t use just the plain porridge version, but they add veggies and herbs to the congee to make it extra powerful.

There are a lot of different types of things you can add to get really healthy effects.

Although, if you are just eating it plain, it will mainly help you with your digestion and gives a boost to your metabolism. Which makes it a really great food to eat when you have IBS. As it can also counteract inflammation in the belly.

And on a quick side note. As you are making the most out of a little bit of rice, this dish is very economic. Out of half a cup of rice, you can make a meal for 4-6 people!

How To Prepare Congee (Base Recipe)

Preparation is really easy and if you look on YouTube you’ll find a hundred of ways on how to make Congee.

Luckily I’ve done the test for you, and I came up with my own ideal mix of Basic Congee.

First of all, the ratio. A lot of websites use a ratio of 1:6-10. I’ve tried all of them with ten giving you a very watery porridge and six almost being just overcooked rice. I stopped at 9. So for every part of rice, I use 9 parts of liquid.

To make it easy. I fill a glass half-way with rice (plain white parboiled rice), then I multiply 0.5 times 9, which gives me 4.5 glasses of liquid.

I use normal water and put it with the rice. After that, I add 2 stock cubes. Some people use a mix of water and boiled stock already, but I just like it this way.

Then you have two options:

This is the base, and as I mentioned before, you can use just anything you want. Let’s have a look at some really healing recipes now:

Within this recipe we’ll be using carrots. Within TCM carrot is good for the spleen. This resolves in giving the Spleen a boost to make sure that your food is digested properly. Be sure to eat this congee in the morning between 9 and 11 AM.

This recipe is also possible to produce in a slow cooker. And actually, it is better to do it this way. It takes more time, but according to TCM cooking on a slower heat preserves the nutrients of your vegetables. And Chi-wise it releases more over time (which is better).

When you plate it up, you can add condiments to it to release more flavor. Things as Sesame oil or Soy Sauce (or both!) are amazing to add to this dish. 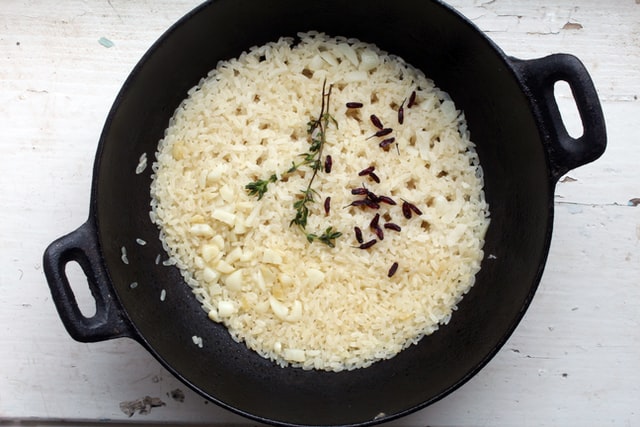 I think it’s a bit difficult to call a rice porridge a sweet congee. Congee traditionally isn’t sweet and you’ll find very little recipes for it either. However, within TCM honey is a very good food for the heart and lungs, which is why I wanted it to add it here as well. Especially when there is a little lung bug floating around in the air.

This recipe you should really do in your slow cooker. Honey is known to lose it’s healthy proporties when cooked. So if you really like to get the healthy benefit of this congee, make sure that you use your slow cooker and put it on the lowest heat.

It will take a very long time, but it will be very worth it!

Does It Fit Into The Yogic Diet?

And now, the long-anticipated question. Is it something for yogis?

The very short and most practical answer: YES, it is!

However, as an online yoga teacher, I do have classes on the most unholy hours. Sometimes my normal breakfast hours will be replaced by a private class.

Which is really fine. I’m living the intermittent fasting lifestyle, so I can deal with having a bit of hunger in the morning.

However, what I did find is that up to one hour before going into class, I could eat a bowl of congee.

And if you’ve been following me, you know that my digestive system is extremely weak.

But up until now, I’ve had no issues at all with having a little food in my belly an hour before starting my class.

And especially if you’ve made it in advance. I always have a big pot in the fridge and I can just heat it again when I want to!

I do have to mention one thing though. If you are traveling through Asian countries, then it might be good to be aware that congee is NOT a vegetarian dish. Be sure that you ask your waiter or chef whether or not there aren’t any animals inside your congee. Traditionally it’s made from bone broth, not that animal-friendly.

Is It Worth Making Your Own Almond Butter?

How To Make Your Own Vegan Red Pesto