In one of my previous articles I was talking about yin and I also added a yoga channel where they’ve offered some yin classes. Now I found a whole package of yin yoga for those who are interested in getting a deeper experience in their yoga practice. Or for the beginner who also likes to deepen their practice right from the start on.

So, in this article I’ve talked a bit about the online yoga platform Yoga Download. And now I’m going to go a little bit deeper into the programs they have to offer. Starting with their yin yoga package. So just in short, it’s a 9-class program that they offer you for $54.

The program offers good classes and my ultimate favorite, the body scan, is also included. Now what is this latter? To me the body scan or Yoga Nidra is a good way to learn how to meditate. The focus is on all the body parts and not so much on the “try not to think”-way. So I really recommend doing some yoga nidra of you’d like to go deeper into your meditations. Besides that, doing yoga nidra in the evening is amazing to snooze off and get yourself some good rest.

These 9 videos that you’ll get on the platform when you order them, are made by three instructors:

What I like about these teachers is that they aren’t the biggest in the yoga industry (or at least not very international), but they do have a crazy amount of experience. They all have their 500-hours degrees in yoga. It doesn’t always show on the website what certification they have. But knowing that someone gives a teacher training you know that they have to get a certain amount of training and teaching done before being able to give a training.

The only shame is, and that’s in general when we look at yin yoga, is that there aren’t male teachers available in the video. 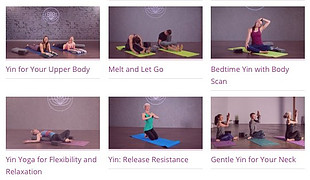 As I said, there aren’t so many men who are teaching yin, I don’t know why, but it’s a shame :). Not that I think they’d be better at it, it’s just that I feel that it might attract more men that way as wel. So what I’m basically saying is: men, don’t be ashamed to do yin yoga!

So next I’ve put an image of what the whole program includes. It’s a good summary of what you can expect, and it has a little explanation of what it the subject of the video is. 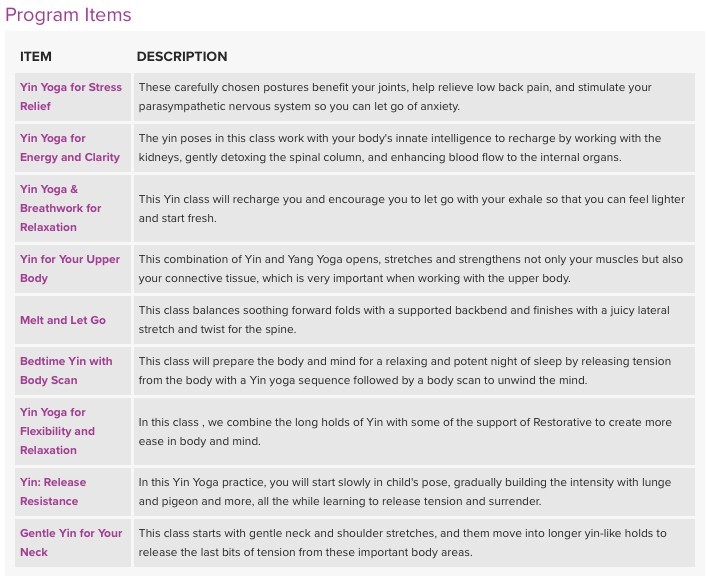 As you can see it contains a little bit of everything. And a part that I also like is that it has some breathwork in it as well. Another important part of yoga is the breath work. In my youtube reviews I don’t put a lot of emphasize on it, because there isn’t a lot of attention on it in those channels. However, breath is everything when doing yoga. In the past I’ve had classes that were completely focussed on breathwork, also called pranayama.

So I’ve already explained some of the benefits of this program:

This package looks great for getting deeper into yin yoga and I’d suggest it to everyone who’s looking for that as well. It might be nice though to explore a bit as a beginner to see what style actually fits you.

That was it for now, if you have any more questions or you’d like to say something, feel free to do so in the comment section below!

5 Tips You Need To Know Before Buying A Yoga Mat

Is It Really Worth Making Tahini at Home? + Recipe