In the beginning of my yoga practice I wasn’t so fond of the usage of yoga props. To me it was 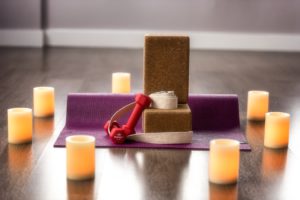 just a hype and it felt like cheating the system and that it was only to create money revenue. Then after a year or something I went into a teacher training and the teachers there were using props constantly. It was there that I found out that props like blocks and straps are only there to support your practice. It’s a little bit like halters are helping out people who are training to gain some muscles. You can gain muscle power without them but it’s gonna be slower and ask for a lot more hours of training to accomplish your goal. It was nice to find out that a good yoga prop can accompany your yoga practice.

So the most common type of prop is the yoga block. You’ve got them in all different kinds of sizes and materials. But they all come in the same shape! Well, it’s a block, what did you expect. 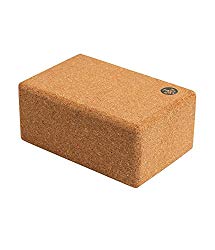 The usage of them can also be different. I’ve got a couple of yoga blocks and I found out that there are so many things to do with them. They are very versatile and for me it’s been so enrichening to find out that they can be such a support! I couldn’t do without them. With that said, I’ve got and had like a dozen of them, just to find out which one was the best for me. So further on I’m going to explain a couple of uses, a couple of different materials and more. 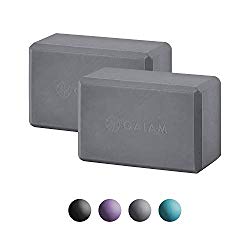 First of all, the usage of a yoga block. In in the beginning of my yoga teacher training they told me that blocks were an excellent tool to sit on. Millions of times I’ve heard my teachers say: rotate your hips outward while you’re sitting to straighten your spine. I could do it for a couple of seconds, but then my spine curved again and I lost my alignment during the meditation part of yoga. The moment that one of my teachers told me that it all had to do with the legs, that was just mindblowing. He explained to me a way to sit on a block with your knees hitting the ground and the arch of the foot hitting the floor as well. Wow, mind-blowing. There was no pain in my back from sitting straight, there was no feeling to just arch my back again and slouch. And that all because of a block ;). And that was only the first one! Now, I want to add here as well that for this purpose I like to have a block made of some kind of foam. There is not a lot of fat on my buttocks, so when I sit on a block made out of cork.. auch.

So secondly the material of the blocks are also very important. Not just because of the exemple above, but foremost because of all the different asana’s. By the usage of a block I’ve learned to go into Bakasana, better known as the crow pose. One of my teacher showed me how to get more confidence and hight to move into this position. And after a while I finally did it! However, this I couldn’t have done with a foam block. A block made out of foam isn’t really stable enough to keep your balance to begin with. So if you use a block to go into a pose, and you already don’t have the right balance to begin with, you will not be able to get into that pose!

Another well known yoga prop are straps. Personally I don’t really use them a lot because I’m already hyper flexible and it just makes me strain my muscles as I don’t feel that I’m going to far into a pose. So this is already the first tip. If you’re too flexible, then don’t buy one! I do can see the benefit of it as you can go deeper into a pose and it gives you some kind of accomplishment when you can reach further then the week before. However, I do use a strap every now and then if it’s hard for me to reach my hands when I’m in cow face pose (and yes, there is a pose called after the face of a cow), in this way the strap will be the exention of your hands and will make sure that you can put a little pressure on your shoulderblades to stretch them. I’m going to put some straps here later on, but don’t expect too many of them. After all, I’m not too crazy about them and I believe that a strap is just a strap.

This next yoga prop is AMAZING. Unfortunately I’m schooled in hatha and vinyasa and therefore I couldn’t use them too often. I also never owned one myself as it wasn’t really neccessary, but I have some experience when I was overworked (yes yoga teachers also can get overworked when they don’t listen to their body) and I had to do more yin and restorative yoga to relax a bit. During those two styles you will use a bolster very often and if your a big fan of them, I would really reccomend them, even if it’s just to use them to watch television in diamond pose. If you don’t want to buy them yourself, then you can buy a couple of blocks and there are some poses you can do with just using some of your blocks to support you (although it is less comfortable). 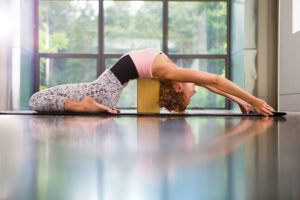 “Where do I have to put all that stuff in?!” I can hear you say already. Luckily there are a looooot of yoga bags to find on the internet. Maybe even too much. Sometimes bussinesses also offer a package of a mat with a bag included. As I was having an oversized mat, and as a yoga teacher you always want to have your material with you, I also had an oversized bag. It almost looked like those army bags, but then coloured in black. If you don’t need that, then please don’t buy one of those. Just stick with a smaller version that just fits your yoga mat. There are many yoga studios that already offer the props that you would need during your yoga class and I would just use those and leave your props at home.

These are the props that I used the most (or not even that often), there is a lot more on the market that might help you with your own yoga practice, but for now I’d just like to focus on these and see whatever fits you best. So as always, if you have some questions, if you’d like to give me your experience, feel free to do so! 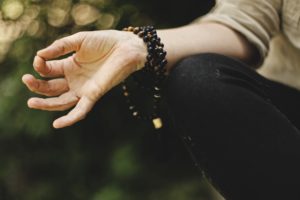 5 Yoga Books You Must Read